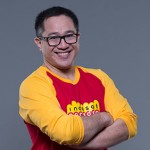 Alexander Rusli assumed the role of President Director and CEO as of 1st of November 2012 after serving as an Independent Commissioner since January 2010. Before November 2012 Mr. Rusli was a Managing Director in Northstar Pacific, a Private Equity fund which focuses on Indonesian and South East Asian opportunities. Prior to his role in Northstar Pacific, Mr Rusli served for the Government of Indonesia for nine years.

In the first six years in government he was an Expert Advisor to the Minister of Communications and Information Technology, where he was involved in the formulation of policy and regulation in the Telecommunication, Media and Postal industries. In the last three years he was an Expert Staff to the Minister of StateOwned Enterprises, overseeing 140 State-owned enterprises with more than 500 subsidiaries.

During that period he also held numerous state-owned corporate positions including: Commissioner of PT Krakatau Steel (Persero), PT Geodipa Energi, PT Kertas Kraft Aceh. Prior to his posts in government, Mr. Rusli has held a position as a Principal Consultant for Pricewaterhouse Coopers Management Consulting, Indonesia.

Mr. Rusli completed all his formal tertiary education in Curtin University, Western Australia. He holds a Doctor of Philosophy degree in Information Systems.