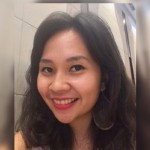 Christa Sabathaly, Sr. Business Development Manager (Ecommerce)
Christa leads one of the biggest LINE Platform in the world for entrepreneurs alike, called LINE@. Since its launched in February 2015, it has been downloaded and used by 1,2 million entrepreneurs in Indonesia. Prior to working in LINE, she has shown affection to the start-up scenes by being mentor and coach in multiple start up communities and co-founded her own online travel business.
Lived in multiple cities : London, Singapore, Bali, and now Jakarta she is a bachelor of economics turned into tech-commerce specialist. She graduated with Cum Laude at University of Indonesia and gotten her second degree in Media Culture from University of Northumbria, UK.