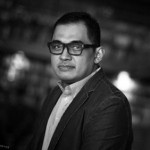 After 12 years in Digital Creative Industry, as consultant and strategic business-planning, in 2016 he decide to joint Orbit Ventura and make a movement called “Berkarya Indonesia”.
Berkarya Indonesia is a movement to change paradigm Indonesia people from consumptive to be more creative and an expertise in Digital Creative Industries, George decide to empowering Virtual and Augmented Reality communities in Indonesia to be more “industrial thinking” and bring VR and AR as a new growth engine from Indonesia.

Now George is a chairman in Indonesia VR AR Association (INVRA) and as a Business Director in Orbit Ventura.