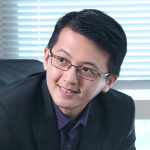 Gunawan Susanto or Gun (@sgunawan99), is the President Director of PT IBM Indonesia.

Gun, 37, is responsible for the strategic direction of the US based company with more than 380,000 employees across the world and in operations in more than 170 countries. He oversees the company’s operations in hardware, software and services in Jakarta and Surabaya offices, including sales and distribution, procurement, global delivery and support functions. Being part of the local IT industry for over a decade, Gun was appointed as President Director of PT IBM Indonesia in 1 April, 2014.

In his over 16 year career with PT IBM Indonesia, Gun has taken on numerous leadership roles. He began his career with the company back in year 2000 as part of the IBM Team Blue management trainee and prior to his appointment as President Director, he served as the Country Manager, Systems & Technology Group (STG) from early 2012.

In 2010, he was named Country Manager, Business Partner Organization (BPO) and was responsible for the sizeable growth of PT IBM Indonesia’s business partner’s ecosystem.

Prior to that, from 2008 until 2010 he served as System Sales Manager for Enterprise/STG Sector.

In 2000 he started his career as Field Sales Specialist for System i in SMB banking, manufacturing, distribution and insurance sector and stepped into the Regional Product Manager for System i in ASEAN role in 2007.

Gun earned a Bachelor in Mechanical Engineering from University of Indonesia in year 2000.

In his leisure time, Gun enjoys Sports especially Futsal as well as Travel and is a big fan of Soccer.